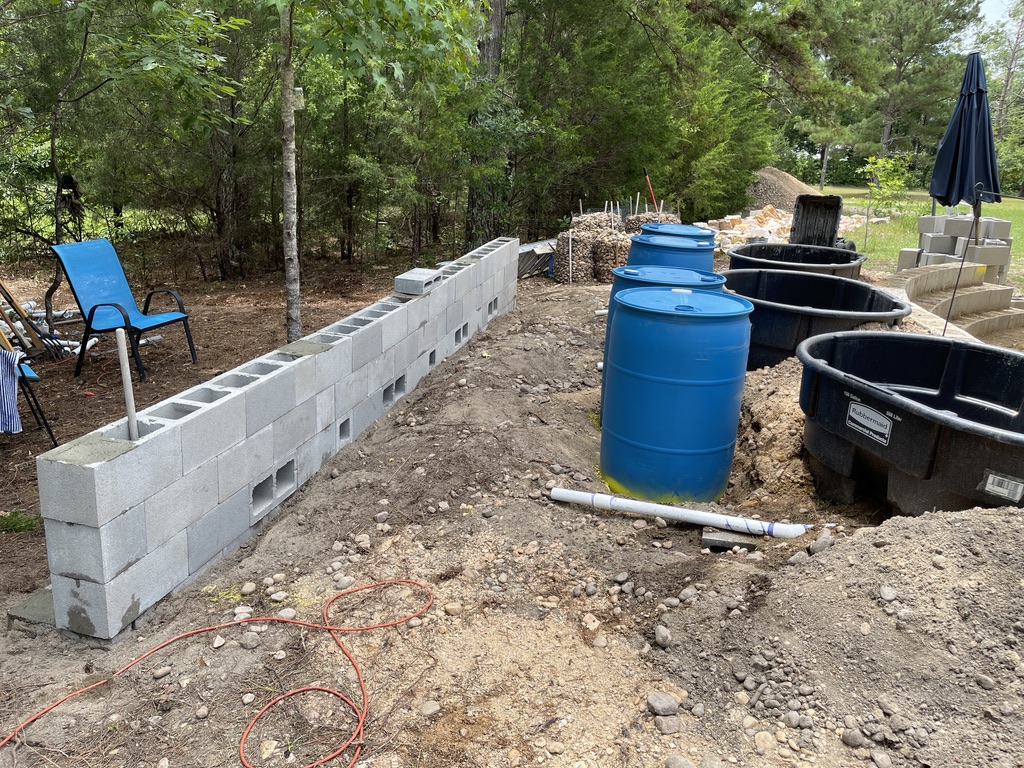 Progress slowly continues here at the water garden project. We took some time to reevaluate the plumbing we had initially put in place and decided that there was too much piping and it was not organized enough the way we had it. After doing more research, and since we have decided not to install a bottom drain, we concluded that we needed mechanical filters to add to the biological (the bogs from the previous posts) filters and so we removed all the criss-crossed piping and built a second wall that will be where all the valves and the pump are located. I will do a video on how all the filtration works in a later post, once we have it all connected and running. For now, the plan is to have the water run through the skimmer, be pulled back to the pump, out to the mechanical filters and then to the biological filters. Once through all that, the water will cycle back into the water garden at the opposite end from the skimmer.

We laid this wall with a few bricks horizontal so that the piping could run from the pump to the filters (the black and blue containers).

The blocks were fairly easy to lay and level, just a lot of digging, positioning, and leveling. Until we found this. We have been fairly lucky thus far to not have run into many of these. This is a pine root and once we removed it, I put it in with our firewood pile for this winter. It was that big.

The blue barrels/drums you see below are 55 gallon and we picked them up (used) for $13 each. If you are building your own pond this is a great way to go. They are safe for the water garden and the Koi we plan to have, as they previously held soy sauce. That means they were food safe. Check Facebook Marketplace or Craigslist for these to save some cash.

Here is a good shot of the wall, the mechanical filters (blue barrels). and biological filters (black containers). After the plumbing is done (again) the space between the water garden wall and the back valve control wall will be filled in with dirt/rock to make the filters, essentially underground (except for the very tops of them).

After laying all the blocks we filled ALL the vertical holes with concrete. The best way we found to do this was by opening the bags of concrete into the cart and then using a scoop (an old pitcher) to scoop the concrete into a metal bucket. We then used a metal paint stir stick that is made to insert into a drill for mixing paint and we mixed the concrete in the bucket with water and then poured into the holes.

Finally, this week, we had come to the conclusion that our shade sails were too low and needed to be raised somehow. Our solution was to run a rope through the clip on this end of the sail and throw the rope over a very high limb on two different trees in our yard. We have 50+ foot trees in our yard, so this was an easy fix. We brought the ends of the rope down the trees and secured them into the tree with an eyebolt made to hold the tension. Problem solved.

While working out in the hot Alabama sun, we often take time for hydration breaks and just a breather. During one of those breaks, this fella came to visit and stuck around for quite a while. Nature is amazing!