This week was packed.  We went to Birmingham on Wednesday so I could have a MRI.  Never had one before, quite an experience.  I can’t imagine being claustrophobic and having to endure one of those.  Good thing I don’t scare easily.  Official results are not in yet, but doc said it looks cancer free.

Round one of Sock Madness V (2011) began March 4th this year.  I am amazed that I am going to be able to finish a complete pair of socks in under a week.  Here is my progress thus far. 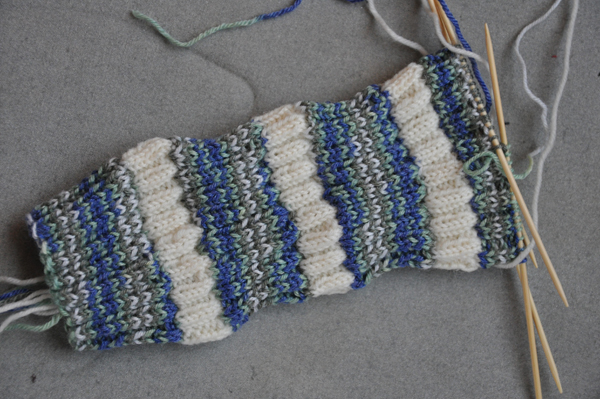 We have two weeks to finish the pair.  Those who finish the pair in time will be put into one of four teams, who will then compete in brackets making additional pairs from patterns we have not even seen yet.  The patterns are all different techniques and the time to make the pairs gets shorter.  There is no way I will win this competition, but it is fun to try.  The consolation is that I end up with several new pairs of socks!  Yay!

On the tatting front, I finished this lovely piece just minutes before the Sock Madness pattern was released. Whew. 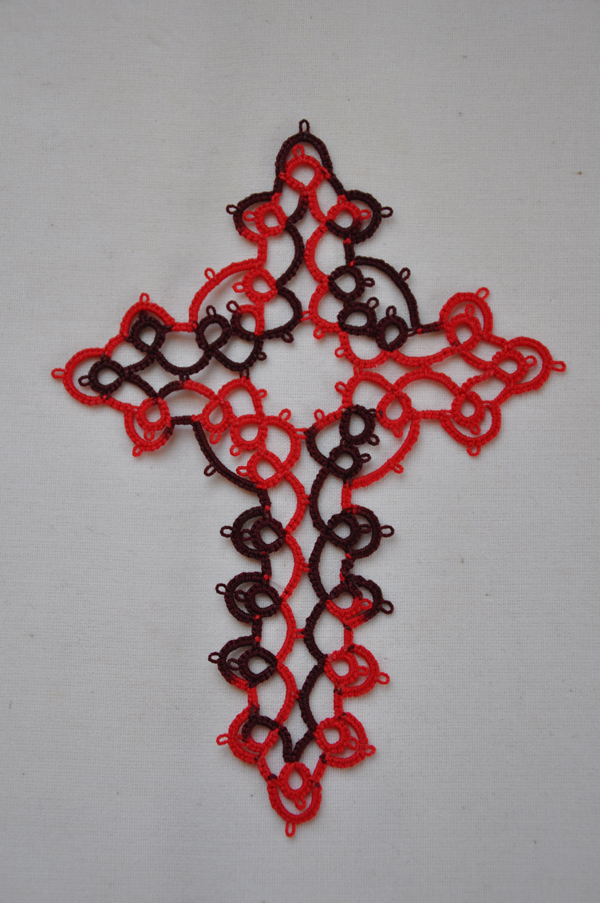 Just like the motif from last week, I love the design, but do not like the colors.  The pattern is “Small Cross” from Tatting with Visual Patterns (Mary Konior) and the thread is Lizbeth (size 20, color 147).  On the spool, this thread is deceiving.  This one looked red and black on the spool, but tatted up red and burgandy.  I think ordering directly from Handy Hands is a good way to go, since I can see the tatted example of the thread colors on their website.  This spool I bought at Hobby Lobby.  I am going to make this one again in black, perhaps with silver around the outside edge.

Finally, there is the subject of my hair.  I was unaware of how sensitive your hair is to changes, like illness and surgery.  My hair has been falling out in handfuls for a month or two now and it was getting so thin and stringy that I had to take action.  Here is the result.

Some people have told me that I am so “brave” to have my long hair just cut completely off.  But I really see it as doing what I have to do.  It is either going to fall out or be cut off and since I would like to think that I am still in some control, it had to be cut.

Those are the highlights of my week.  What was yours like?